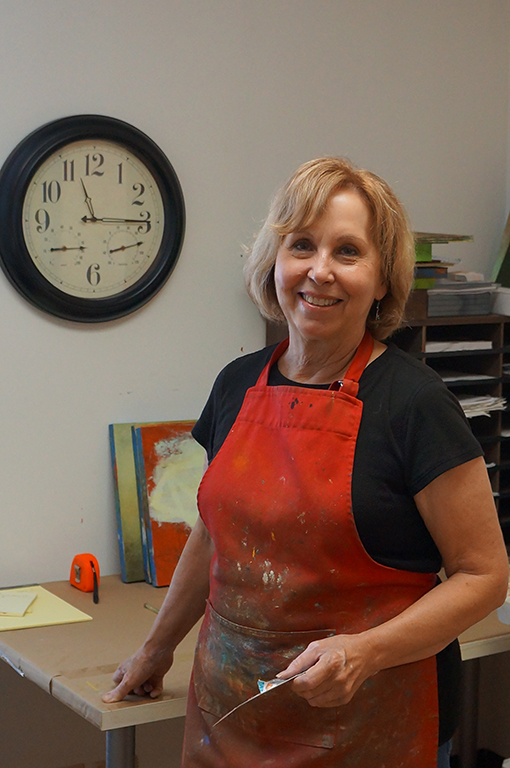 Joan Geary is a lifelong resident of the Chicago area, growing up on the north side, both in the city and suburbs, but currently residing in the southwest suburbs. She first studied art as a teenager in a summer program at the School of the Art Institute of Chicago. Later, at mid-life, she studied painting and sculpture at the College of Du Page in Glen Ellyn, and also did workshops with several internationally known artists, including one in Italy. Her work has been featured in numerous venues throughout the Midwest as well as publications such as the Chicago Tribune, The Doings, and a book titled Cold Wax Medium: Techniques, Concepts & Conversations by Rebecca Crowell and Jerry McLaughlin.

Geary is an intuitive painter whose works evolve without any premeditated plan. In the past decade, she has been working mainly in oil and cold wax medium, building the surfaces with layers of paint until the work begins to suggest something meaningful, often spiritual. However, lately Geary has been experimenting with pouring thin washes of oil paint, increasing the element of chance and then building on the happenstance. Gestural mark making is a big part of the process.

As a born again Christian, Geary states: “More and more, as I draw closer and closer to God, my work is becoming cosmic, evoking a transformation of spirit and mind. I often pray for guidance with the work, and more than anything, I want the end result to glorify Him. Sometimes, my prayers are answered immediately, with an almost ‘automatic writing’ kind of solution to a problematic painting. Many of the current works are inspired by scripture as well as poets such as William Blake and T.S. Eliot. They deal with issues of creation, the nature of time, and salvation.”

Geary maintains a daily painting practice in her studio in Burr Ridge, IL.